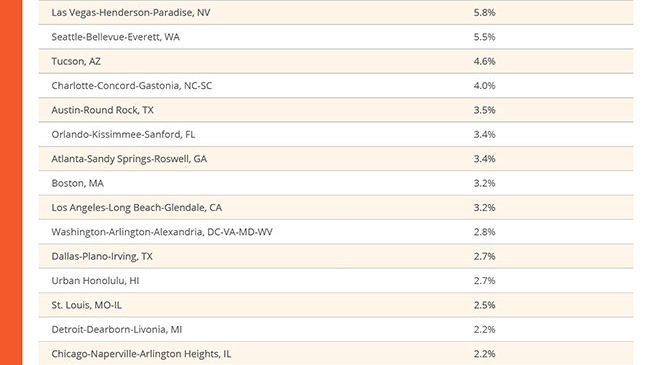 According to a new report from CoreLogic, U.S. single-family rent prices rose 3% in September over August.

However, compared to last September, the national rent increase has remained flat.

Because there is low rental home inventory, there is a growth of single-family rental prices.

September is also the 65th month in a row where low-end rentals spurred national rent growth. Rent prices among this segment, defined as properties with rent prices less than 75% of the regional median, increased 3.8% year over year in September 2019, the same as in September 2018.

Higher-end rentals, which are properties with rent prices more than 125% of a particular region’s median rent, increased 2.9% in September, slightly up from last September’s 2.5%.

Metro areas with limited new construction, low rental vacancies and strong local economies that attract new employees tend to have stronger rent growth. Hence Phoenix being at the top of the list.

“Vacancy rates have fallen moderately on the national level over the last quarter – with a 0.3% decrease in the third quarter of 2019 compared to a year earlier – and more significantly in select metro areas,” said Molly Boesel, principal economist at CoreLogic. “Of the metros analyzed in the CoreLogic Single-Family Rent Index, Phoenix experienced the largest decrease in vacancy rates at 2.6%, which helped drive its rent growth to the top of the nation in September.”