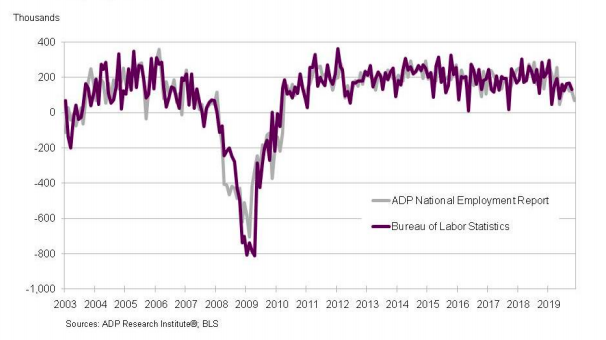 U.S. employers unexpectedly put the brakes on hiring in November, according to ADP Research Institute and Moody’s Analytics.

Private sector employment increased by 67,000 jobs, dropping 45% from the prior month’s pace, according to the jobs report issued on Wednesday. Economists expected an increase of 150,000 jobs in November, according to the average estimate in a Dow Jones poll.

“The goods producers still struggled; whereas, the service providers remained in positive territory driven by healthcare and professional services,” Yildirmaz said. “Job creation slowed across all company sizes; however, the pattern remained largely the same, as small companies continued to face more pressure than their larger competitors.”

The chart below demonstrates the rate of increase since 2013:

Below is a breakdown of job segments that saw changes in employment between October and November:

The goods-producing sector decreased by 18,000 jobs, including:

The service-providing sector increased by 85,000 jobs, including:

NOTE: This report is a monthly measure of the change in total U.S. non-farm private employment derived from actual, anonymous payroll data of client companies served by the company. The data is collected and processed with statistical methodologies similar to those used by the U.S. Bureau of Labor Statistics.