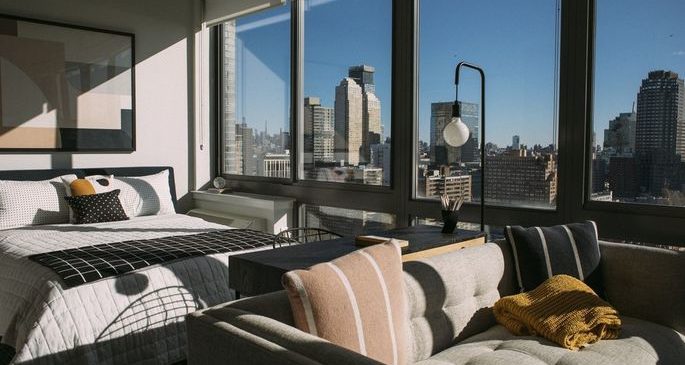 Manhattanites looking for more space for their money have for years defected to Jersey City.

But what is drawing them across the river lately are compact studios in Manhattan-style luxury buildings.

Jersey City developers are betting that filling buildings with more studio apartments will pay off, as tenants trade personal space for high-end amenities like shared lounges, co-working areas and Zen gardens, at a price that comes cheaper than would larger, one-bedroom units.

At some luxury buildings, the studios are the main attraction.

“Studios are no longer relegated to the lower floors of a building or shoehorned in where larger apartments wouldn’t work,” said Jacqueline Urgo, president of new development advisory company The Marketing Directors, who worked with the developers of the 46-story 235 Grand Street, where 425-square-foot studios start at $2,850 a month.

Nearly half the renters come from New York City, she said.

“We have a studio on the top floor with perhaps the best southern view of the Statue of Liberty and New York Harbor in the entire building,” Ms. Urgo said.

A studio apartment at 235 Grand Street with views of Manhattan.

Jose A. Alvarado Jr. for The Wall Street Journal

Michael Barry, the president and chief executive of Ironstate Development Co., which co-built 235 Grand with KRE Group, said he has gradually included more studios in his developments in recent years, after noticing leasing patterns at one of his earlier Jersey City buildings, which had fewer studios than his more recent projects.

“We would have almost no turnover in studios, or if we did, they would go immediately…whereas we might have standing inventory of one-bedrooms at certain periods of time,” Mr. Barry said.

Other new buildings under construction in Jersey City offer more studios than any other unit type. In the last phase of the Enclave, a three-building rental development led by BNE Real Estate Group, 65% of the 238 apartments will be studios.

Perhaps no developer in Jersey City believes more in studios than AvalonBay Communities. For its coming 70-story tower at 444 Washington Boulevard, it has planned 505 studios, more than half the 950 planned apartments. A company representative declined to comment on the plans.

Young professionals are buying into a lifestyle that features socializing, working or relaxing away from one’s apartment, builders and marketers say. “You’re not spending all your time in your efficiency apartment,” Mr. Barry said.

Jose A. Alvarado Jr. for The Wall Street Journal

Another reason for the studio boom has more to do with a developer’s balance sheets.

As the Jersey City market has gotten hotter, the price of land for developers has increased dramatically.

According to real-estate data company Reonomy, Jersey City development sites, or land that is sold to builders, traded for $32 a square foot in 2014. By this year, that number has risen to more than $118 a foot and is higher in the most coveted areas where large towers can be built, like Paulus Hook, where one development site is on the market for $633 a foot.

Planning more studios allows developers to get a higher return on that increasingly high land cost, by raising the number of individual apartments available for rent. A studio will often have a lower monthly price than a one-bedroom, but if it is small enough, it will bring in more revenue on a dollar-per-square foot basis.

The studio trend isn’t just in the rental market, either. China Overseas America, a Chinese-government owned builder, is nearing the end of construction on 99 Hudson Street, a 79-story condominium tower with 781 apartments. But next door it is planning a boutique, 30-unit condominium that will be all studios.

Building residents will have access to all of 99 Hudson’s 65,000 square feet of planned amenities, which include a 4,000-square foot swimming pool with private cabanas, a spa and a landscaped lawn on the eighth-floor observation deck.