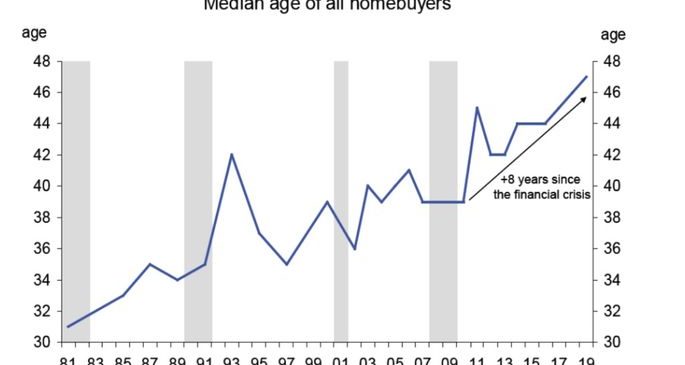 Despite recent data that younger generations are beginning to buy houses, on the whole, those same generations are waiting far longer than their parents did to buy their first house.

There are various reasons for that delay, including a dramatic increase in student loan debt and a general shifting of attitudes towards the traditional homebuyer cycle. Put simply, people are waiting longer to marry, have kids, and buy houses.

But just how much longer are people waiting to a buy house than they used to? Quite a long time, as it turns out.

As more members of the younger generation are postponing homeownership and homes are becoming multi-generational, the median age of U.S. homebuyers is now 47.

That figure has gone up eight years in just the last decade.

According to Realtor.com, the median age has increased by eight years since the financial crisis. But the trend goes back further than that.

A new report from Deutsche Bank Research shows that the median age of homebuyers in 1981 was 31. Since then, it’s gone up 16 years and now sits at 47.

In metros and cities that attract young homebuyers the most, prices of homes have skyrocketed, and inventory has also gone down in record numbers this year.

Now, Generation Z seems to be the next wave of homebuyers, but there aren’t enough homes for them to buy, even if they’re ready and willing.

That’s thanks to Baby Boomers who are aging in place, leaving fewer homes on the market.

But according to TransUnion, at least 8.3 million first-time home buyers will enter the mortgage market between 2020 and 2022, due to low unemployment, record-low mortgage rates and rising wages.

In the wake of the affordability crisis, the average annual income of homebuyers has also increased to over $93,000, well above the national median income of $61,937.

Realtor.com suggests that younger adults struggle with student debt, making it harder to take out a mortgage.

Citing the National Association of Realtors, 83% of non-honmeowners said they think having student debt has delayed the ability to buy a home.