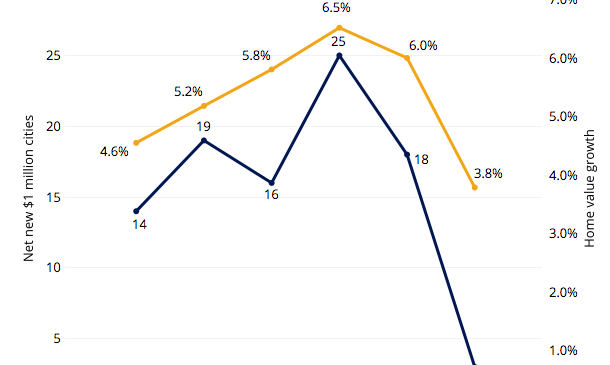 The luxury real estate market had a bumpy 2019, but ended in a steady rise in luxury home prices.

In the first quarter of 2019, luxury home prices declined for the first time in almost three years, and sales saw their largest decline since 2010 as supply increased by double digits.

Luxury home prices later increased 0.3% year over year, marking the first time in nearly a year that luxury prices did not fall.

Now, there are 218 cities with a typical home value of at least $1 million, three more cities than there was in December 2018, according to a new report from Zillow.

But last year was the first year since 2016 that any cities actually fell off of the $1 million list, as home values declined in some expensive areas after a period of extreme price growth.

According to Zillow, seven new cities joined the list, but four saw home values decline below the $1 million threshold in 2019, due to the slowing down market, meaning there was a net increase of only three.

This is also the first time since 2016 that any cities fell off the list.