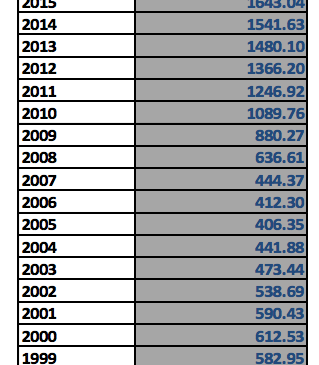 That figure has increased by more than $1 trillion in the last decade, and according to recently released data from Ginnie Mae, much of that increase has been driven by a rise in VA loans.

A new report from Ginnie Mae states that VA loans now make up 42% of the agency’s single-family mortgage bond issuance. That figure has been on the rise every year since 2009, according to Ginnie Mae.

Now, VA loans make up more than 40% of Ginnie Mae’s sizable portfolio (as shown the chart below).

As stated earlier, Ginnie Mae’s overall portfolio has increased substantially since the housing crisis, as more borrowers turned to FHA and VA loans, likely due to market conditions surrounding Fannie Mae and Freddie Mac as they recovered from the crisis.

As seen in the chart below, Ginnie Mae insured $880.27 billion in mortgages in 2009. That figure broached the $1 trillion mark in 2010, and has increased in every year of this decade.

Ginnie Mae’s portfolio increased in every month of this year, pushing past $2.1 trillion in October, the most recent data available.

On the VA front, Ginnie Mae and the VA have worked for several years to address soaring VA loan refinances that may have been putting service members and military veterans at risk.

For more than two years, the Department of Housing and Urban Development, Ginnie Mae, and the VA have been investigating whether certain lenders were aggressively targeting service members and military veterans for quick and potentially risky refinances of their mortgages.

The investigation led to some lenders being booted from Ginnie Mae’s primary mortgage securities platforms, and other lenders being restricted for questionable conduct.

Ginnie Mae even went so far as to issue new rules for VA loan refinances, restricting how soon a loan could be refinanced after its original origination date.

Ginnie’s move coincided with steps taken by the FHA to limit cash-out refinances on FHA-backed loans.

“Ginnie Mae is committed to maintaining a strong MBS program built on a foundation of flexibility and reliability in order to meet the secondary market needs of the Issuers responsible for loans to veterans under the VA program,” the agency said in the report.

“Recent policy changes regarding eligibility for VA mortgages pooled into our securities underscore our commitment to providing a liquid and efficient MBS product for lenders and investors that protects veterans’ home equity while also minimizing risks to taxpayers,” Ginnie Mae added.