Slowing home price appreciation has eroded
potential fix-and-flip profits over the past year, but demand at
foreclosure auctions has remained strong as buyers shift to a renovate-to-rent
strategy.

Stanley’s experience is similar to that of many buyers using Auction.com, according to an analysis of more than 9,000 properties sold at foreclosure auction via the Auction.com platform in Q2 2018. While the majority of these purchases (56%) were rehabbed and resold to owner-occupants, 44% were still non-owner-occupied a year later, indicating they were being held as rentals.

Stanley said that rental property is cash-flowing thanks in
part to changing market conditions that make renovate-to-rent more attractive.
The U.S. homeownership rate dropped for the second consecutive quarter in Q2
2019, following 10 consecutive quarters with increasing or flat homeownership
rates, according to the U.S. Census
Bureau.

A lower homeownership rate translates into more demand from
renters, which places upward pressure on rental rates and downward pressure on
vacancies, both favorable trends for rental property owners. The U.S. rental
vacancy rate dropped to 6.8% in Q2 2019, down from 7.0% in the previous quarter
and unchanged from a year ago, according to the Census data.

Those same market conditions are helping to fuel what CNBC
recently called an “exploding” build-to-rent market.

“We are becoming more of a rentership society than a
homeownership society, and that is playing into the build-to-rent model,” said
Bruce McNeilage, co-founder and CEO of Kinloch
Partners, which is doing build-to-rent projects in five markets across the
Southeast: Nashville, Atlanta, Raleigh, North Carolina, and
Greenville-Spartanburg and Columbia in South Carolina. “We’re primarily focused
in on doing entire subdivisions … self-contained subdivisions with their own
homeowners’ association.”

Even by conservative estimates, the renovate-to-rent market
is much larger than build-to-rent, according to an Auction.com analysis of
public record data from ATTOM Data Solutions. More than 1.1 million single
family homes and condos (1,163,184) were sold to cash buyers in 2018,
representing 26% of all existing home sales during the year. While not all of
those cash buyers are investors, the vast majority are likely investors either
buying the home as a rental or to flip.

More than one in three buyers (36%) purchasing at
foreclosure auction or bank-owned (REO) auction said hold-for-rent is their
most preferred investing strategy, according a June
2019 survey of buyers who have purchased multiple properties on the
Auction.com platform.

Similarly, an analysis of more than 9,000 properties sold at
foreclosure auction via the Auction.com platform in Q2 2018 shows that 44% were
non-owner-occupied a year later, in July 2019. That non-owner occupancy status a
year later indicates the properties are being held as rentals.

The analysis also looked at an estimated rental yields —
based on an automated rental valuation model provided by Collateral Analytics —
for those 9,000 properties. As evidence that investors are picking the optimal
investing strategy, the average potential gross rental yield for the 44% of
properties still investor-owned a year later was higher than it was for the 56%
of properties that were owner-occupied a year later —  11.7% for the investor owned versus 10.5% for
the owner-occupied.

The higher potential gross rental yield for investor-owned
properties was not based on investors getting a better deal at foreclosure
auction. In fact, the average winning bid-to-credit bid ratio for the 44% of properties
held as rentals was higher at 116.2% compared to 115.1% for properties that
were subsequently sold to owner-occupants after being purchased at foreclosure
auction.

“Lenders are confronted with a classic cost-benefit decision
at the foreclosure auction, and the credit bid is typically the reserve price over
which the benefit of selling at foreclosure auction outweighs the opportunity
cost — the benefit lenders would get from taking back the property and
reselling or holding as a rental,” said Jesse Roth, SVP of Strategic
Partnerships and Business Development at Auction.com. “The slightly higher
ratio of price-to-credit bid for properties held as rentals means that sellers
at foreclosure auction continue to benefit from a consistent pool of buyers
willing to pay above the reserve price even as the housing market shifts toward
one that is more favorable to rental investing.”

Renovate-to-rent investors likely have a higher price
ceiling than fix-and-flip investors in the 2019 market because their potential
returns hinge on rental rates — which continue to increase steadily in most
areas of the country given the aforementioned market conditions — while
fix-and-flip returns are more dependent on home price appreciation, which has begun
to slow in an increasing number of local markets. 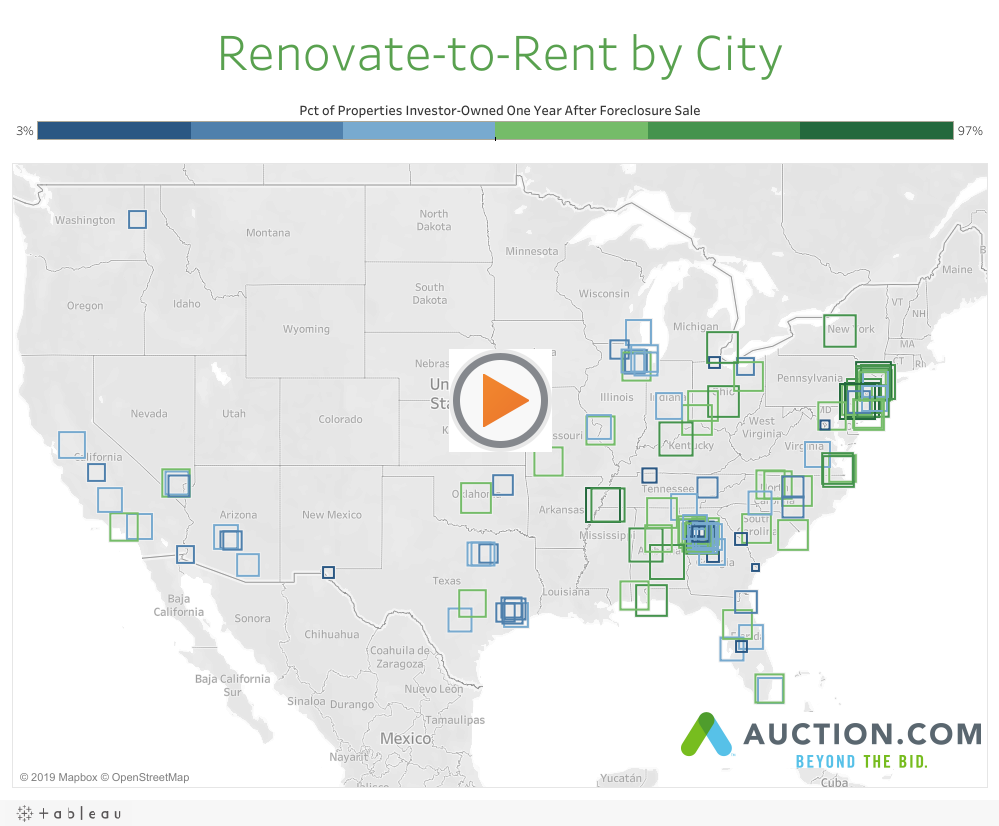